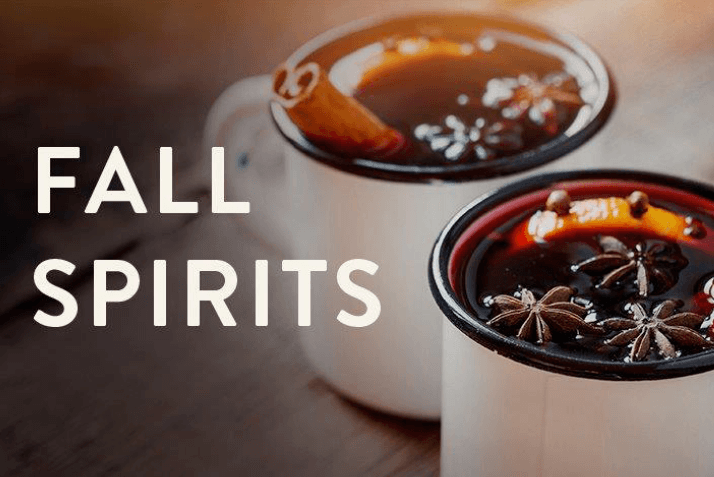 Like clockwork, the air turns cool and crisp, and suddenly it feels like apples, cinnamon, pumpkin and cloves should be included in just about everything, from candles and fragrances, to pies and macchiatos.

Seasonal libations are an especially easy and fun way to make fall sing (and let your inner mixologist shine). When hosting your next get-together, think less pumpkin spice latte, and more spiked pumpkin scotchie, by stirring up these five seasonal spirits.

Place cider, apple slices, honey and cinnamon in a saucepot. Bring to a boil and let simmer for 5 minutes to release the flavors. Strain the mixture (saving the apple slices for garnishing) and add bourbon. Pour into serving glasses. Sip warm.

Pour all ingredients into a shaker filled with ice. Shake vigorously to mix. Pour into martini glasses and serve.

Bring apple cider to a boil in a 2-quart saucepan over medium-high heat. Reduce heat to medium; cook, stirring occasionally until cider is reduced by half, about 2 minutes. Add spices and remove from heat. Allow to cool, then strain. Chill.

Combine syrup and vodka in a cocktail shaker filled with ice. Shake and strain into two champagne glasses; top with prosecco.

Combine the cider, wine, honey, cinnamon sticks, zest, juice, cloves and star anise in a large saucepan. Bring to a boil, then simmer over low heat for 10 minutes. Pour into mugs; add an orange peel to each and serve.

Shake ingredients before pouring into a coupe glass. Garnish with a cinnamon stick.

If you would like to skip the mixing and get straight to the sipping, stop by The Grove to savor enticing fall flavors at Blue Ribbon Sushi Bar & Grill, and Bar Verde at Nordstrom. We got an extra Tips now you can tinder without Facebook easily

HOLIDAY HAPPENINGS: THE BEST THINGS TO SEE AND DO THIS SEASON

Immerse yourself in the twinkling lights, festive sights and joyful experiences that await you.   Here’s your guide to the best holiday happenings in…

Map Out Mother’s Day: Shop, Dine & Treat Her to the Best

Show her how much she means to you. It’s no secret that moms do a lot for us. It could be your mom, someone who…

What To Do, See & Eat This Spring

The season of new beginnings is in full bloom. Take advantage of the springtime sunshine with Instagram-worthy photo ops. Indulge in the mouthwatering menus of…